Blogbook -- Be Changing Our Standards 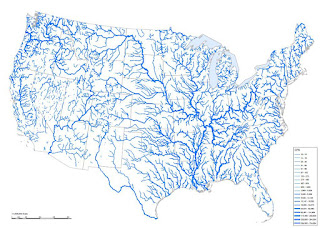 Entry 34 My examples of Faulkner, Walker, and MF DOOM ( post 33 ) show change in language over time as well as variation -- that is, language contesting -- even if such changes are unacknowledged. And, it should be pointed out that Strunk and White agree on this point (see post 25 ). They explain, “language is perpetually in flux: it is a living stream, shifting, changing, receiving new strength from a thousand tributaries, losing old forms in the backwaters of time” ( note 236 ). What do you think those “thousand tributaries” are? They are various English languagings that are not at that time considered by those in power to be standardized. They are Black Englishes, and multilingual Englishes, Southern Englishes, and Midwestern Englishes, not to mention other languages, Spanishes, Frenches, etc. (picture from USGS Twitter account ) Language ain’t never been static nor still. The Russian linguist Valentin Nikolaevich Voloshinov explains this dynamic of language as the “ceaseless genera
Post a Comment
Read more
More posts

- April 24, 2021
On April 18, 2021, I posted on this blog about why I was leaving and the CWPA and asked for a loving and compassionate boycott of the CWPA until it could demonstrate structural changes that addressed its racism and White supremacy culture. As of today, that post has been accessed 11,850 times (less than a week). Three days later, the WPA Journal and its publisher, David Blakesley, both offered a statement and letter of support of the boycott and the demand for the CWPA to make antiracist changes. Patti Poblete, one of the CWPA EC members at the meeting, offered her own rendering of and thinking about the meeting on her blog (4/21/2021). Six days after I posted, the CWPA's  Executive Board released a formal statement  (dated 4/23/2021). On May 10, 2021, the CWPA-GO officially separated from CWPA and issued this statement with demands .  As of this writing (revised on 09 Sep 2021), the petition for boycotting the CWPA has 778 signatories on it. That is over double the total membe
Read more