Showing posts from November 7, 2021
Show all 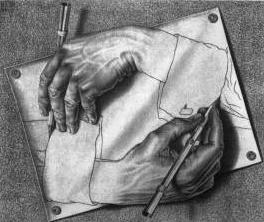 Entry 35 In posts 30 , 32 , 33 , and 34 , I discussed the CCSS L.11-12.1 anchor standard and the first of the standards underneath it (L.11-12.1.A). Now, consider the second standard, L.11-12.1.B. It is equally problematic as the first. And it works to maintain the white language supremacy, or a single standard that is dominant in all schools and colleges. It also exemplifies a problem that such standards tend to have when used in classrooms. It’s a problem of circularity, of being one’s own judge.  L.11-12.1.B states, “Resolve issues of complex or contested usage, consulting references (e.g., Merriam-Webster's Dictionary of English Usage , Garner's Modern American Usage ) as needed.” This standard reinforces white habits of English language in classrooms by using as a yardstick the very standard being contested. So according to this standard, the way you resolve a contested usage is to consult references that point back to the standard. Do you see the problem? This is overdet
Post a Comment
Read more
More posts

- April 24, 2021
On April 18, 2021, I posted on this blog about why I was leaving and the CWPA and asked for a loving and compassionate boycott of the CWPA until it could demonstrate structural changes that addressed its racism and White supremacy culture. As of today, that post has been accessed 11,850 times (less than a week). Three days later, the WPA Journal and its publisher, David Blakesley, both offered a statement and letter of support of the boycott and the demand for the CWPA to make antiracist changes. Patti Poblete, one of the CWPA EC members at the meeting, offered her own rendering of and thinking about the meeting on her blog (4/21/2021). Six days after I posted, the CWPA's  Executive Board released a formal statement  (dated 4/23/2021). On May 10, 2021, the CWPA-GO officially separated from CWPA and issued this statement with demands .  As of this writing (revised on 09 Sep 2021), the petition for boycotting the CWPA has 778 signatories on it. That is over double the total membe
Read more