So let me now return to Poe’s poem, sort of (see "Racism Is A Boat" part 2 of 2). In a literacy course, it may help us understand not just the stuff from which a show like “Raven’s Home” is made but also why we may react to either artifact in the ways we do. We have been conditioned by racist discourse. And this conditioning started long before we were born. The conditioning isn’t just crafting individuals’ habits and desires. It’s shaping the systems around us and their habits and goals. The racist discourse before our time created the range of choices, ideas, and actions we engage in today.

What this means is that if we are not consciously trying not to participate in racist discourse, we will be default. It’s how everything is made. 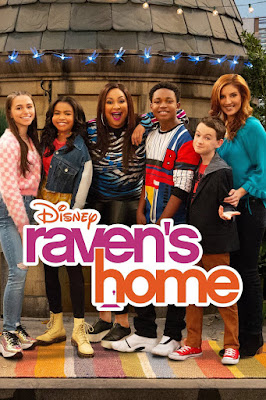 Now, Poe didn’t invent the associations around ravens. There are many long-standing myths, stories, and lore around ravens. And it's easy to see how other associations with race, ones apart from ravens, like Blackness as evil and the “mark of Cain,” can be subtly attached to images and references to ravens in culture.

The ancient Greeks saw them as guides to the afterlife, Apollo’s spy and messenger, and as a symbol of bad luck or ill omen. In the Bible, the raven is the first bird mentioned in Genesis (8:7). Noah releases a raven “which went forth to and fro, until the waters were dried up from off the earth.” In the Quran (Surah 5:27-31), a raven teaches Cain how to bury his brother, whom he has killed. In Norse mythology, the raven is associated with Odin, often considered the ruler and father, and depicted with one eye, a cloak, and a wide brimmed hat. He has two ravens, huginn ("thought") and muninn ("memory"), who bring him news of Midgard each day. Odin is associated with a number of attributes wisdom and death, royalty and war, knowledge and poetry.

Ravens are associated with Celtic (Badb and Morrígan), and Welsh gods (Bran the Blessed). Crows and ravens are depicted in Hindu traditions as in the Story of Bhusunda, where a crow has the knowledge of the history of the world. And ravens play a prominent role in North American indigenous folklore too, such as those of the Northwest peoples of Haidas, Heiltsuks, Inuit, Salish, Tlingits, and Tsimishians. For instance, in Haida culture the raven helps bring the sun, moon, stars, fresh water, and fire to the world, while in Tlingit culture, two ravens are personified, one as the creator of the world, of light and darkness. The other raven is childish, selfish, and sly.

Poe’s poem surely draws on these kinds of cultural associations that follow the raven as an often paradoxical symbol of knowledge, creation, death, the afterworld, trickery, wisdom, and foresight. Yet when we add to this the historical context of slavery, the Fugitive Slave laws, and the impending Civil War discussed earlier (see posts 1 and 2 of "Racism Is A Boat"), the raven of the poem becomes associated with slaves and the debates about slavery, even if only nascently. Once the poem is born from these conditions, they stay with the poem, in its discursive DNA, if you will, and what the poem and its imagery represent in U.S. culture. Might Baltimore’s NFL team, the Ravens, be working from “The Raven” and the lore of the bird? Of course.

The central character of “Raven’s Home,” Raven Baxter (played by Raven-Symoné Christina Pearman), is a single Black mother with supernatural gifts. She can see the future, but she’s also a trickster. She keeps her gift hidden, not even telling her own children, who are twins (Are twins the product of magic?). How might this show help us think about Poe’s poem, or visa versa? Are they each a version of the long tradition in American fiction of the “magical Black character,” or the “magical Negro,” a stock Black character who has magical or mystical powers and helps White characters? The magical negro is a version of the “noble savage,” a similar literary tradition, and both are ubiquitous in film today.

But could our feelings and tacit assumptions that come from such depictions of the “magical negro” also affect how White people relate to Black, Indigenous, and People of Color when the topic of social justice, racism, or civil rights comes up? Are we (BIPOC) asked to participate in the magical negro script, helping our White colleagues, allies, and others along in understanding such things? Will our White colleagues go mad, as Poe’s White narrator does, when we do not perform for them, giving them some kind of answer to sooth them and their anxieties over racism and White supremacy, when we say “nevermore”?

In this instance, Raven Baxter can be read as participating in a long line of such racist discourse, and the name “Raven” provides support for the character’s magical ethos. In “The Raven,” the black, mystical raven is associated with death, slavery, perhaps Africa, and knowledge witheld, never to be spoken or revealed to the White narrator (and audience). The raven will not participate in the magical negro tradition, even as the poem invokes the tradition, and this can explain why the White narrator goes mad. His expectations of Blackness are not met. His sense of White privilege and entitlement are denied by Blackness.

The TV show’s representation of Raven Baxter, a clairvoyant, single, Black woman with twins, may be another instance of the magical Negro. Does she use her powers and presence to help White characters around her? Is she also, like the raven in Poe’s poem, resisting, keeping her magic to herself, tacitly saying, “nevermore” to White characters or viewers around her? While racist discourse may provide the materials to make such artifacts, the artifact may do a number of other things too, things that counter the racist discourse.

If read as already participating in racist discourse -- and not as either a racist text or an antiracist one -- the poem and TV show, as any "text" might do in a classroom, could offer students a way to critique such White cultural impulses and expectations that are a part of racist discourse. In short, texts such as Poe’s poem and shows like “Raven’s Home” are both and. They participate in racist discourse while also offering signals that may counter such discourse.

As you may have figured out, Orientalism as a racist discourse is based on the same things as the early racial discourses of men like Blumenbach. All racist discourse is based on categories, stock characters like the magical Negro, Fu Manchu, or the Asian as Yellow Peril, that create value and hierarchies of people, as well as decisions and actions in the world. These categories then create relations among groups of people in the world, which is to say racist discourse creates politics, or hierarchical power relations based on race, and uneven choices for each racial group -- especially when we are not thinking in racial terms. The terms are already set in the discourse.

These politics are not simply made with language or stereotypes reproduced over and over. They are not created simply by creating and using racial categories in words and images. Racial politics are also created by actions and practices done in the world that have racist consequences or outcomes. They are created through habitual behaviors that are understood as the norm, reinforced by the racist language, and end up reinforcing hierarchical racial categories or racist effects. This will be my next move in this discussion, a move toward our standard operating procedures as already participating in racist and White supremacist discourse.

This blogbook is offered for free in order to engage language and literacy teachers of all levels in antiracist work and dialogue. The hope is that it will help raise enough money to do more substantial and ongoing antiracist work by funding the Asao and Kelly Inoue Antiracist Teaching Endowment, housed at Oregon State University. Read more about the endowment on my endowment page. Please consider donating as much as you can to the endowment. Thank you for your help and engagement.